Well readers, we have another vile emission from the arsehole of the online gaming industry, the 1668/JAZ operation in Curacao. The latest shithole casino reported to us is the easy2win.bet scam casino site. On the front of it, looks normal with games from Bentsoft, Habanero, GameArt, Pragmatic Play, Fugaso, Explosiv and Play N Go. Cannot even see any fake Netent or Novomatic games which this scam operation 1668/JAZ specializes in. Nice to see game providers will supply software to platforms that operate under 1668/JAZ despite knowing the scummery that goes on with them. So are you good to go? Are you fuck.

As with all the fraudulent sites operating under this worthless piece of crap 1668/JAZ, with easy2win.bet scam casino you will see that wherever you are located they will take your money. This time it’s not Alpha Interactive, GameTech or Gammix etcetera but I-TAINMENT EUROPE LTD. You can sign up from places you shouldn’t be able to such as the UK. You may see incredibly attractive bonuses shouted at you from the front page which are meaningless when the tossers will not pay out should you win any significant amount.

At easy2win.bet scam casino any big wins will be stalled on withdrawal and then the same bullshit excuses begin. “We are verifying the win” or “We need more documents” or “You breached this term” (conveniently invented afterwards) and their traditional favourite of arbitrary account closure. Always remember these sites are low-rent operations designed to take as much as possible with as little as possible going back the other way. The payment providers are complicit in these unregulated scam money laundering casinos too so you have really got to do your homework.

These bogus casinos will try and spam forums with their filth like this or rely on dishonest fuckers to promote them, those sites who ain’t too fussy who suffers as long as they make their cut. There is another easy2win site dating back to 2016 for the Malaysian market, an unlicensed clip joint registered in Panama. It seems this 1668/JAZ crap could be an expansion of their activities.

Just avoid easy2win.bet and any casino that has the 1668/JAZ mark of Satan at the bottom.

So we have the Bronze Casino scam which is yet another rogue casino skin from the crooks at Alpha Interactive! Do I have to tell you what craphole junk ‘license’ they are using? I shouldn’t fucking have to as it is the turd even of all online gaming scams. Yep, it’s our old fraudster’s friend 1668/JAZ, the number that should have any online gambler shitting their pants and running in the opposite direction until they’re dry. 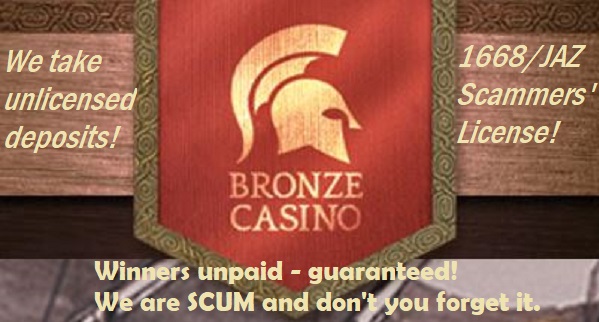 Just about everything is bogus here.

The Bronze casino scam relies on the usual torrent of filth spewed out from under cover of the ten-cent Curacao bullshit license 1668/JAZ in order to fleece the misguided and ignorant who are foolish enough to even piss in their direction, let alone deposit.

You can choose from a whole variety of fake slots, shithole casino terms, lack of responsible gambling enforcement, fuckwits in Customer Services, arbitrary account closures, non-payment of winnings and rogue bonus terms. If that doesn’t grab you then do the right thing and find a proper reputable casino.

Yep, it appears legitimate casino affiliate programmes will still pay rogue affiliates to recruit players and let them place their ads alongside shithole casinos such as Bronze Casino, as we can see with this bunch of scamming twats at casinocircle.co.uk. These fuckers do NOT have a UKGC license and should never be taking UK players – ever!  UK should be geo-restricted and the site should not have the UK flag on it. Fuck-me, what asswipes these crooks are.

Bronze casino scam is perpetrated too by dishonest casino review sites that give bogus praise in order to get their 50 pieces of silver, like these bastards and this shower of shit here, who advertise them with the UK flag and encourage UK players to join when in fact the wankers don’t have a UKGC license and therefore cannot lawfully accept UK players. Yes, Vamos affiliates spread this Bonze casino scam shit about!  Then again, scammers hiding under the fraudster’s license 1668/JAZ don’t give a flying fuck about minor details like that. With dishonest sites promoting this filth, no wonder some poor fools get parted from their cash via the Bronze casino scam.

AVOID BRONZE CASINO – DON’T EVEN THINK ABOUT DEPOSITING THERE.

Yes, today we have 2 scammers on offer for the price of 1! The fraudulent and bonus Cure-a-cow license 1668/JAZ has another couple of scam casinos for your enjoyment today, the first of which is the Winner365 scam casino. GameTech group, surprise-fucking-surprise.

Winner365 scam casino involves the usual shit you’d expect with bogus software not supplied from the official Netent server, arbitrary closure of player accounts and stealing the money within and of course never paying the poor fuckers who’ve been unwise enough to deposit there.

Well, we all know by now what to expect from some banana republic in the Caribbean and their $3.99 ‘licenses’ which aren’t worth a cigarette paper and so the bullshit continues. They’ll take money from any twat wherever they are in the world because proper licensing means jack-shit to these asswipes as you can find out if gullible enough to join them.

Of course, equally dishonest are the cunts that promote them. Now these shitbags luckily enough also get ripped-off – it goes something like this…

The 7 Gates Of Casino Hell:

1. Shithole casino winner365 opens.
2. Scam sites promote their affiliate programme, Affplayer, with bullshit like this:
3. Morons and crooks become affiliates.
4. They are paid for tricking players into joining.
5. Winner365 soon gets a repuation for being the scammers they are.
6. Once they’ve fleeced enough players they close their affiliate programme and/or casino which will be reskinned later as another shithole casino brand.
7. They don’t pay the moron affiliates now their usefulness has ended.

If you ever think about joining winner365 casino, please seek psychiatric assistance. Or piss your money down the drain. Either one will be as pleasant as the other.

Bronze casino scam to avoid at all costs! 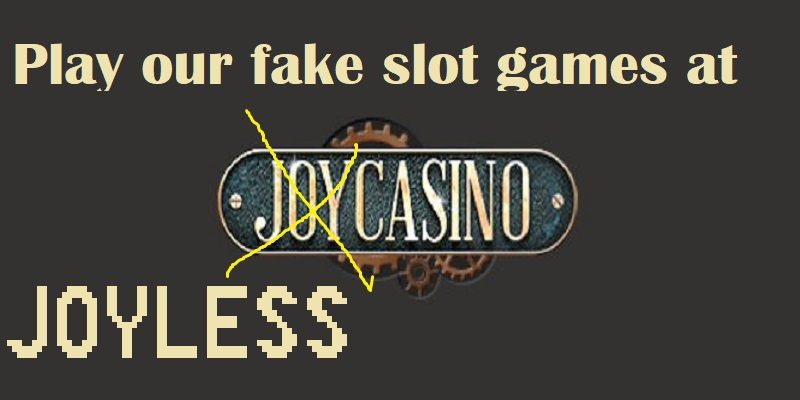 Yep! The latest bunch of crooks to achieve pride of place on Shitholecasinos are Casino-X and JoyCasino who are providing fake Novomatic games to some countries like Russia. Now we know this firstly because Novomatic have confirmed the fact they don’t provide software to these scamming fucks and secondly because it’s likely they’re using rogue software provider 2WinPower who have a catalogue of fake Novo, Playtech and Netent slots to name a few. Now it does make me friggin’ wonder how firstly these twats even get supplied with slots by legitimate developers (which they do) and secondly how some so-called player advocacy sites like AskGamblers can actually contrive to give them and other fraudulent sites a 8.5 rating? Now we all know that aside from the obvious shill ‘reviews’ it’s money, as some places would promote a dog turd if it paid them; fuck the player as long as they earn cash! What the fuck are AskGrumblers doing giving a scamming shithole site nearly 8.5 and a proven top-notch site like Slotsmillion 8.69? It’s completely batshit.

Well another thing that’s odd here is the lack of any licensing seal on these sites. Now that’s either because they have a ‘license’ that is worth less than your own excrement i.e. 1668/JAZ or 8048/JAZ from Curacao that is one they want to hide OR they don’t have one altogether – either way it’s a bent as bag of sidewinders and players should avoid both Casino-X and JoyCasino like a fart in a diving suit! 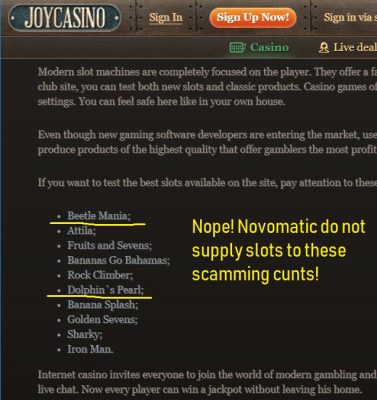 Now this shower of shit actively promote themselves on antisocial media like Twatter and Farcebook in order to draw more mugs into the fold. You MUST avoid Casino-X and JoyCasino like fresh faeces on the pavement when wearing your new sneakers. if you don’t, it’s pointless whingeing afterwards as they have no reputable license to offer any comeback under. Your call.

Well, we have another car-crash of a shithole casino group to add to our dire litany of fraud, deceit and vomit-inducing business ethics. If you don’t know by now then as soon as you see this piece-of-crap Curacao ‘license’ information under ANY casino then run like a dog with it’s balls on fire!

Yes, it’s our old mate ‘JAZ’ with the bullshit 1668 scam master license from some craphole in the Caribbean Sea. A Curacao license costs fuck-all, is worth fuck-all and means absolutely….you get the picture by now.

‘This casino is operated by Gammix STS B.V registered at Dr. Hugenholtzweg Z/N, Curacao under the licence No. 1668/JAZ issued to Curacao eGaming, authorised and regulated REALLY? by the Government of Curacao. Viggoslots © Copyright 2018 All rights reserved.’

So having established the worthless credential of this Viggoslots casino and its Gammix/Danguad Ltd. ‘License’, what is the problem? Fake slots? Actually no, that’s about the only scam they haven’t pulled as far as we know, but it seems they’ve dropped this license and have been reincarnated under a new ‘Gammix’ one. The thing is, both Gammix and Danguad are on the same Netagame Platform and are essentially the same scamming people.

Just a reminder that many other shithole casinos ran under this Danguad license such as Casino Ventura, Casino Adrenaline, Jackpots Knights and one of the worst shithole scamming casinos on record, Staybet to name but a few. Their crimes against depositors included: abusive social media posts, shilling on casino forums, misleading terms, retrospectively changing terms to avoid paying winners, retrospectively excluding games from bonus play after depositors won with them, confiscation of winnings using invalid arguments and the inevitable non-payment of players ‘due to a site update’ that has apparently been going on for 6 months. Rolleyes and read more HERE!

Gammix and Danguad are simply sections of the same broken Netagame turd, as are all the above casinos. Type those casino names + ‘scam’ into Google and you’ll find so many complaints that your eyes will bleed.

If you’re stupid or misguided enough to send your cash on a one-way trip to these East European and Israeli con artists, you can glean some comfort from the fact that when they’ve scammed enough people they may launder the profits by going legit and applying for a UKGC license via a fake front company like Affpower and their cronies have with bcasino (oceanbets scam) and tonycasino under the GS Technology License. Happy days….